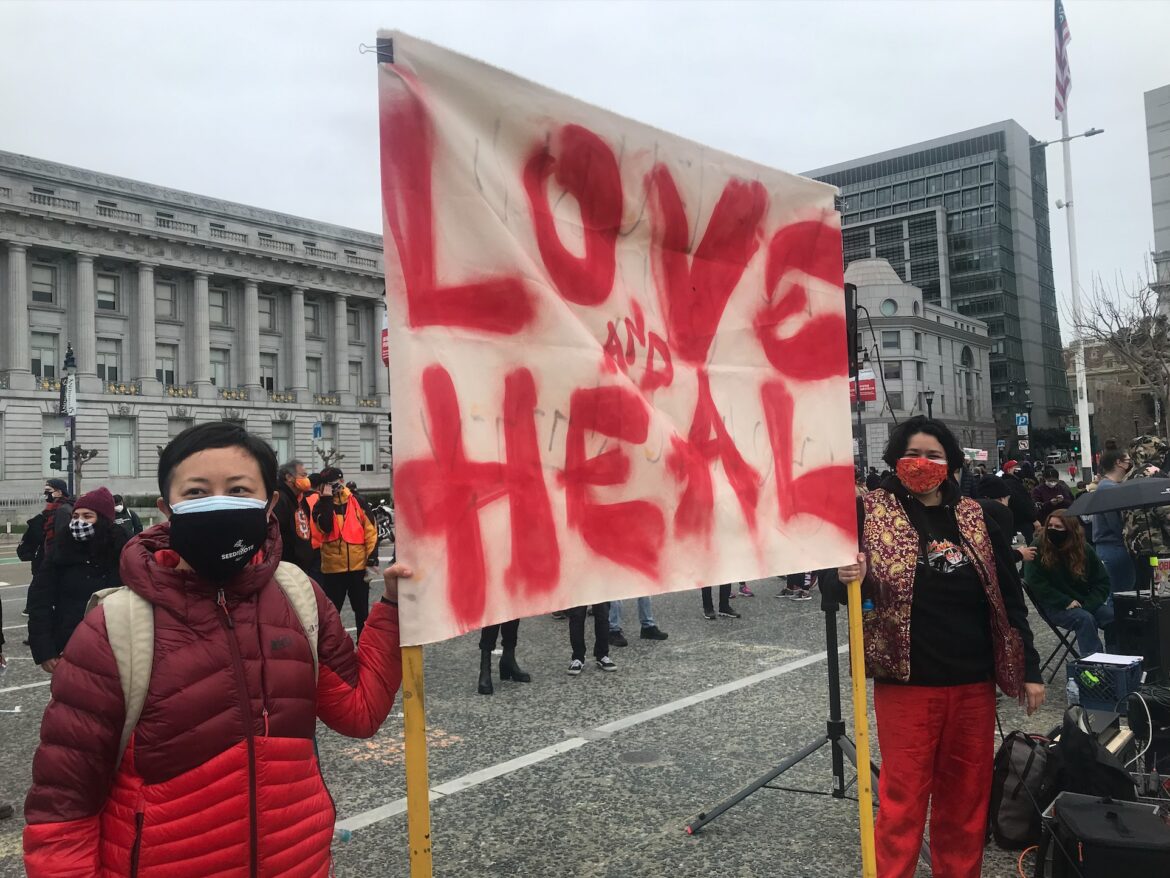 The United States has seen a spate of violent attacks and hateful rhetoric against Asian Americans during the coronavirus pandemic, and recently a series of violent crimes against Asian seniors in the Bay Area has sparked concern and calls to action, including public gatherings. In San Francisco and Oakland, organizers arranged for socially distanced events over the weekend to emphasize the need for additional resources and services to advance public safety.

The gatherings were part of a wider-ranging effort to address a feeling of helplessness among Asian American elders, said Lai Wa Wu, policy and alliance director at the Chinese Progressive Association.

“Especially in this moment of COVID, when so many people are afraid enough as it is to go out,” Wu said, “our elderly people, now, they’re feeling an extra sense of reluctance, to have to avoid places, because they’re afraid that somebody will target them.”

The effort to address crime and attacks on Asians and seniors through grassroots organizing and mobilizing supportive services began long before the recent attacks, through the formation of the Coalition for Community Safety and Justice.

“We have started this coalition last year to come together to really look into what we can do for short term or also long term solutions,” said Sara Wan, executive director of Community Youth Center. Those include multilingual recovery services for survivors of crime, she said, which would prevent crime more effectively than increased law enforcement activity.

“I think we’re not against policing, but we don’t think that will be the ultimate solutions for public safety,” Wan said. To address more systemic problems like poverty and trauma, she said, “it really takes the community together to really address the deeper root causes of violence for solutions.”

At Sunday’s gathering in San Francisco’s Civic Center Plaza, Justin Hu-Nguyen, director of development and communications at the Southeast Asian Development Center, called for municipalities to provide supportive services to both victims and perpetrators of crimes.

“We want to support the full person and everyone gets what they need to heal,” he said. “To end the cycle of violence, we must expand equitable access to housing, education and the opportunity to live a life of dignity.”

Both events also called for unity across races and communities.

“There’s an honest conversation that we need to really have and reconcile with as to why elders, and often Asian American folks, are being targeted now,” Wu said. “How do we be honest in this moment, to name the systemic racism that pits our communities against each other?”

Tinisch Hollins, associate director of Californians for Safety and Justice and herself a survivor of violent crime who lost two brothers to gun violence, said targeted communities should recognize racism as a common enemy, and acknowledge crime as one of many effects of the pandemic.

“The increase in crime and violence should not be placed on the shoulders of one community. We are all responsible for safety. We are all in a moment of crisis,” Hollins said. “It should not be a surprise that violent crime is affecting our communities right now when we have not done the work of addressing mental illness, unaddressed trauma, addiction and homelessness.”

Like other organizers and speakers, she said increased social services, rather than law enforcement crackdowns, would improve safety.

“We’ve been struggling with this for decades, because we put our investments in the wrong places,” Hollins said. “We cannot incarcerate our way into safety. And we cannot have safety at the expense of one community over the other. We all deserve to be safe.”

A segment from our radio show and podcast, “Civic.” Listen daily at 8 a.m. and 6 p.m. on 102.5 FM in San Francisco, and subscribe on Apple, Google, Spotify or Stitcher.