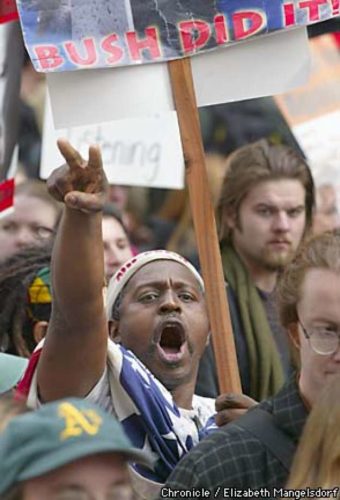 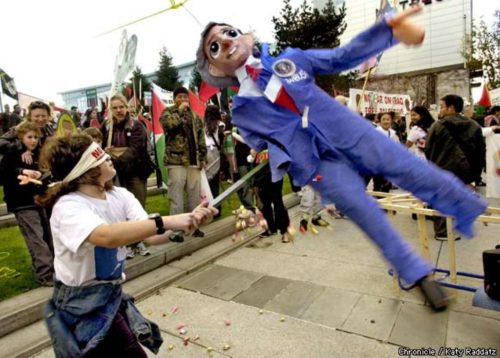 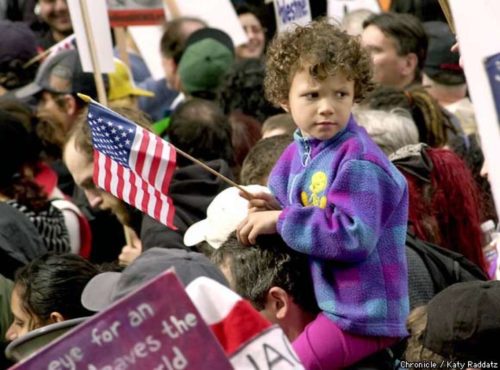 PHOTO BY KATY RADDATZ–THE CHRONICLE Anti war march in San Francisco. SHOWN: People of many ethnicities and ages marched for peace; many made the point that peace is NOT unpatriotic. (There is NO NAME available for this child). 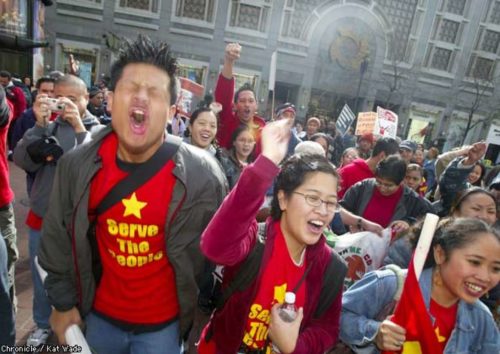 Filipinos for Global Justice, NotWar, got into the swing of things as they made their way down Market Street…l-r Paolo Sambrano, Lillian Prijoles and Ivy Climacosa led the way. By Kat WAde/Chronicle

A thousand immigrants and longtime Americans — representing dozens of community groups and bound by fear of how much worse their lives could get if a war erupted — came together Sunday for the first time.

Connie Liu, a 40-year-old garment worker who lost her job a few months ago because of the economic slump, was one of them. She lives with four family members in a 10-by-10 room in a Chinatown single-room-occupancy hotel.

“Things are bad now,” Liu said through an interpreter. “They would only get worse if there were a war.”

Liu’s neighbor wanted to come to the rally with her. “But she had to work at a restaurant,” she said quietly.

From the start, the speakers’ platform at San Francisco’s anti-war rallies has mirrored the region’s demographics. But the organizers of the huge turnouts have had to acknowledge an uncomfortable point: The demonstrators themselves haven’t reflected the Bay Area’s diversity.

It wasn’t until Sunday — the third major peace demonstration — that a “People of Color” contingent marched together, 1,000 strong.

‘HAVE TO DO BETTER’

“We’ve done a good job, but we realize that we have to do better,” Andrea Buffa, national co-chair of United for Peace and Justice, one of five co- sponsors of Sunday’s march and rally, said earlier in the week.

Anti-war activists say that to strengthen their position, they need to broaden their support beyond the middle-class whites who have dominated the rallies thus far.

To that end, the coalition that organized Sunday’s march made the deepest outreach efforts yet into the region’s communities of color — the people, organizers say, who would be most affected by a U.S. attack on Iraq.

Over the past few weeks, anti-war organizers went door to door in previously overlooked neighborhoods like San Francisco’s Chinatown and placed an unprecedented number of ads in ethnic and community newspapers.

And indeed, many protesters came Sunday because they were actively recruited for the first time. While the total was modest compared with Sunday’s overall turnout, the large number of newcomers pleased organizers, who face several challenges in organizing communities that have not turned out in large numbers for anti-war protests since the Vietnam War.

“Foreign policy is one of the last things on the agendas of the small community groups,” said Linda Burnham, executive director of the Women of Color Resource Center, based in Oakland, one of the main organizers of the contingent, along with Racial Justice 9/11. “Anti-war work is nowhere in their budget. A lot of these groups are focused on City Hall.”

But if a war redirects money from state and local government into the federal coffers to support the military, Burnham said, communities of color will be among those hardest hit.

Some fear a wartime atmosphere would give police and immigration authorities more latitude in arresting people in minority communities.

One marcher, Sama Ab Ayyah, worries about more attacks on the Mission District apartment where she lives. In the past two months, vandals have spray- painted “die pig” and “kill Arabs,” and tossed human feces at her door. The attacks — one of 150 anti-Arab hate crimes that activists have counted in San Francisco since the Sept. 11 attacks — started after she placed a 4-inch-high Palestinian flag on her front door.

“We will be targets again if there is a war,” said Ab Ayyah.

In the 400,000-strong Filipino community, many have friends or family members working in the Middle East as maids and construction workers, said Rhonda Ramiro, a San Francisco resident. An estimated 1.5 million Filipinos are employed in such jobs there.

“The biggest challenge in getting people out here,” Ramiro said, “is that there’s a lot of fear in publicly showing up at a demonstration.”

Several of those marching with her and the 150 members of Filipinos for Global Justice Not War were airport screeners laid off last fall in the wake of a new federal act requiring screeners to be U.S. citizens.

“The younger people here know that their schools are bad already and will get worse if there’s more money going for the military,” Ramiro said. “And the older people lived through martial law (in the Philippines) or think that a war will bring more American military presence in the Philippines.”

Shared opposition to the war is linking together neighborhoods that haven’t had much to do with each other before, said Elizabeth Martinez of Latinos Contra La Guerra.

Early Sunday morning, a few dozen Latino protesters from the Mission District traveled to Chinatown, where they joined about 500 protesters marching to the rally from Portsmouth Square.

“These are two communities who have not had many connections in the past,” Martinez said.

The Chinese Progressive Association had distributed 1,000 flyers in Chinatown over the past few weeks.

“People say the Chinese community is passive, that they’re isolated, that they don’t care,” said Leon Chow, the association’s chairman. “But we expected 250 people, and 500 showed up to our rally.”