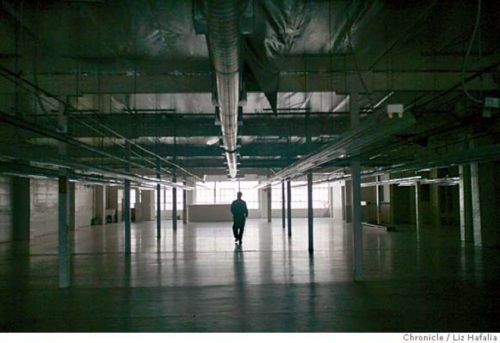 GARMENT_007_LH.JPG The 9000 square foot factory of Leeda Sewing–1026 Mission St.–closed down this year. Owner William Chan (middle)just sold his building for 2.5 million dollars. The local garment industry has dropped from its peak of 30,000 in 1990 to around 3000 today, losing many jobs to China. Shot on 12/20/04 in San Francisco. LIZ HAFALIA/The Chronicle MANDATORY CREDIT FOR PHOTOG AND SF CHRONICLE/ -MAGS OUT 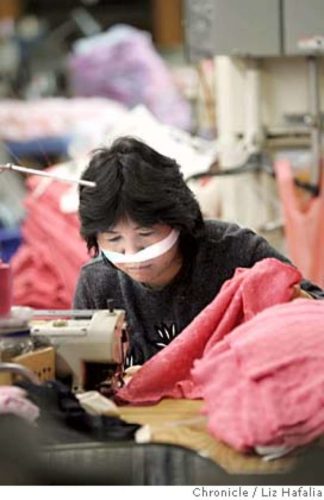 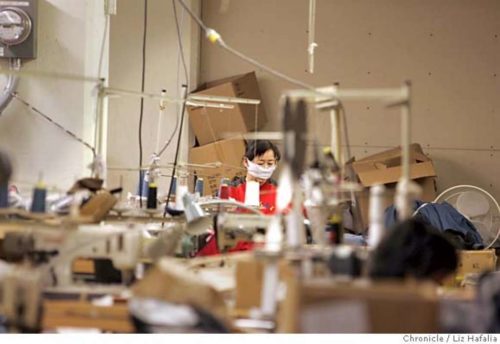 GARMENT_167_LH.JPG At a Mission St. garment factory, seamstress Ai-Xin Huang, surrounded by empty stations is the only employee sewing at this time while another was sorting. The local garment industry has dropped from its peak of 30,000 in 1990 to around 3000 today, losing many jobs to China. Shot on 12/21/04 in San Francisco. LIZ HAFALIA/The Chronicle MANDATORY CREDIT FOR PHOTOG AND SF CHRONICLE/ -MAGS OUT 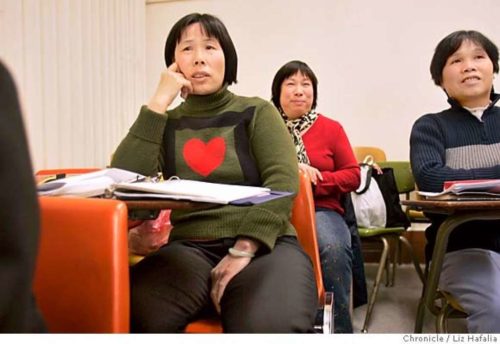 GARMENT_150_LH.JPG Peng (heart shirt), a woman who lost her job at Leeda Sewing, is presently taking ESL courses at Chinatown’s CCSF (City College of San Francisco). The local garment industry has dropped from its peak of 30,000 in 1990 to around 3000 today, losing many jobs to China. Shot on 12/21/04 in San Francisco. LIZ HAFALIA/The Chronicle MANDATORY CREDIT FOR PHOTOG AND SF CHRONICLE/ -MAGS OUT

Jenny Kwong sewed up a lacy green gown as Cantonese music blasted in the background one recent evening.

Falling business had forced the San Francisco factory owner back behind the sewing machine. What her workers produced covered the rent on the factory. To turn a profit, she herself needed to sew, Kwong said with a sharp laugh.

Kwong is caught in the relentless decline of the Bay Area garment industry. For years, local factories have closed and jobs melted away as production shifted to cheaper places around the world. Today, the Bay Area is home to an estimated 3,500 garment workers, down from a peak of 30,000 in 1990.

In the latest blow to the local industry, a global system of quotas expired on Jan. 1 that had restricted the international flow of garments made in China, India and 146 other nations belonging to the World Trade Organization.

The lifting of import quotas could accelerate the loss of local jobs, say factory owners and community activists. Within the next couple of years, the Bay Area could lose more than half of its remaining garment jobs, which many Chinese immigrant women have long depended on for their livelihood.

Those women — middle-aged or older, poorly educated and unable to speak English — often don’t know about retraining programs for workers who lose their jobs to increased imports, and have few opportunities even with that help.

“This is the death knell,” said Katie Quan, chair of Center for Labor Research and Education at UC Berkeley and a former garment union leader. “The elimination of quotas makes it extremely attractive to move everything off- shore.”

Ironically, many local garment workers may lose their jobs to cheaper factories in China — the homeland that they left to find a better life in the Bay Area. That economic powerhouse sets the standard for cheap, efficient and full-package production.

As the last barriers to imports fall, Kwong’s business is in jeopardy. The 60-year-old woman studied fashion design in Hong Kong, where she ran her own bridal store before immigrating to the Bay Area. Here, she worked in a garment factory and on an electric assembly line and ran a dry-cleaning business before starting her own factory nearly two decades ago.

Now, more than half of her sewing machines are idle after she cut the payroll from about 20 to just eight workers. She said she feared the loss of the quotas: “We can’t be cheaper than other countries.”

The Bay Area garment industry has roots dating back to the Gold Rush, when immigrant Levi Strauss founded the company that made the world’s first jeans and later became a major source of San Francisco’s manufacturing jobs.

A decade ago, the North American Free Trade Agreement set off the steep decline of the nation’s garment industry as clothing labels outsourced production to Mexico and other countries with cheaper labor. In 2002, Levi’s shuttered six U.S. manufacturing plants, including its historic Valencia Street operation in San Francisco. The two remaining plants in San Antonio closed a year ago. Last year, the state Department of Industrial Relations listed 204 garment factories in San Francisco; in 1998, it listed 406.

In 2004, sewing machine operators in the San Francisco metropolitan area earned on average of only $357 per week, according to state Employment Development Department. Bay Area garment workers, many of them Chinese immigrants, must deal with long hours, piece-rate pay schedules and poor working conditions, labor activists say.

On top of offshore competition, San Francisco’s increase of the minimum wage to $8.62, high rents and other operating expenses have led to many plant closures, factory owners say. Many of the remaining factories are small, employing 20 to 40 workers, who come in only when there are orders.

Workers in the city sew clothes and evening gowns for local designers such as Jessica McClintock, who say they keep their production local for greater control and fast turnaround; the U.S. military, whose clothes must be American-made; and other niche manufacturers.

Housed in rundown buildings, the factories are in the South of Market district, the Mission, Potrero Hill and other industrial areas in San Francisco.

The building at 972 Mission St. houses the Consulate of Jordan along with a handful of garment factories and a Web design firm.

Upstairs, under florescent lights, rows of middle-aged women in a factory hunched over sewing machines recently. Some wore homemade face masks, protection against the fabric particles. Their activity filled the air with a low hum.

“I can’t speak English, so it will be hard to look for work,” worker Lily Ng, 48, said in Cantonese as she sewed a trendy pink top.

In another factory on the same block, just one worker sewed, and another folded pants. Plastic bags stuffed with cloth scraps, crumpled paper and threads littered the floor amid empty sewing machines.

Every so often, a company buying sewing machines on the cheap to sell overseas calls her, said factory manager Cindy Huang. She has declined the offers, but she predicted that her factory could close within months.

No work is coming in, Huang said. She wore fuzzy blue slippers and fleece, bundled up in the cold, drafty factory.

“It’s depressing, to work on something for so many years and watch it fall apart,” Huang said in Mandarin. “It’s good for China but bad for the people here.”

The federal Trade Adjustment Assistance program, established in 1962, provides training and benefits to workers who are laid off because of increased imports from a foreign country. Congress has appropriated $220 million annually for this program.

Nationwide, factories making textiles, apparel and other fabric products were among the two hardest-hit industries in fiscal year 2004, according to the Department of Labor.

In 2003, the state informed 12,989 laid-off workers that they were eligible for these federal training and unemployment benefits — more than five times the number in 1998.

“It may not be right for everyone,” he said. “It depends on each person’s situation and whether they feel the program will work for them.”

In the 12-month period ending in June, graduates of the federal training and benefits program earned about 72 percent of their previous wages, and 62 percent found jobs within three months, according to the Department of Labor.

Critics say that applying for these benefits is complicated, involving approvals from state and federal agencies, and difficult for non-English speakers to navigate.

For example, the letter informing workers that they are eligible for the benefits is in English, although it lists help lines in other languages.

Some garment factories change their name before they close or may cut their checks through another company, creating paperwork confusion, community activists say. Other factories may not inform government agencies of all eligible workers. Some unemployed only learn about the federal benefits months later through word of mouth, the activists say.

Because the benefits are tied to signing up and attending vocational programs, some immigrants may sit uncomprehending through classes conducted in English, said Gordon Mar, executive director of the Chinese Progressive Association, community organizers in San Francisco.

Afterward, workers often cannot find jobs related to their vocational training or can find only part-time jobs, he said.

Since fall, the association has fanned out to more than 70 garment factories in San Francisco, handing out flyers about its seminars on what workers can do if they lose their jobs.

Peng Mei-Ying immigrated here two decades ago. Unable to speak English, she had few job options and two children to raise. She became a garment worker, sewing eight hours a day for minimum wage. Her back ached all the time, and the detail work exhausted her.

The gowns she made were expensive and sexy — not her style, said the short, solid woman. In her free time, she went for walks or stayed at home. “You need money to have hobbies,” Peng, 48, said in Cantonese through a translator.

Along with her husband, a retired restaurant worker, Peng lives in the Sunset District with her son, a cab driver, and her daughter, a college student. Peng, who receives about $610 per month in unemployment, said her relatives help with expenses.

In November, Peng began an 18-month program to learn English and professional care-giving provided by Self-Help for the Elderly. With only a middle school education, Peng has been out of the classroom for decades. She’s forgotten how to write a lot of Chinese characters and never learned English.

“It feels like you can’t learn anything,” Peng said. “You think about what you don’t know. It’s so hard.”

The women asked for advice on what training programs to sign up for and how to prepare for interviews with state employment officials.

Take your time to decide, Peng advised her fellow former garment workers. They can’t force you to choose.

Peng is enrolled in a new training program geared toward garment workers. Offered by City College at its campus in Chinatown, the program teaches English and care-giving, light housekeeping, and meal preparation.

In class, a dozen middle-aged Chinese women sat with notebooks on their desks, pink plastic lunch-bags at their feet, murmuring words such as “area code,” “California,” and “Happy Holidays.”

“You need English not just to make a living. You need English to enjoy yourself, to travel and see the United States,” said teacher Milton Owyang. “In one year’s time, you’ll have no limitations because you’ll know how to ask where to go.”

Student Huang Hui-Ming sat in the front row. At 59, Huang is reinventing herself again. In 1990, the math teacher immigrated from southern China with her husband. She wanted to tutor, but did not know enough English. She became a garment worker.

“There’s no more garment industry. I have to do something to live,” Huang said in Cantonese. “Everyone wants to know how far they can take their skills.”