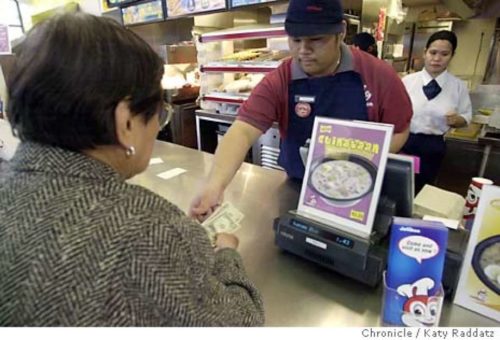 Aiza Baclit and Marvin Llaga take home about $1,500 every month as workers at Jollibee Restaurant, known as the “Filipino McDonald’s,” in the South of Market District of San Francisco. Of that combined net pay, $300 is earmarked to assist family members in the Philippines.

The immigrant couple, neither of whom have the right to vote, were anxious bystanders Wednesday as they awaited the result of PropositionL. News of its passage, which will raise San Francisco’s minimum wage from $6.75 to $8. 50, deeply moved the couple and their co-workers, many of whom also remit parts of their paycheck to the Philippines.

“It will help a lot, not only us but our siblings (back home),” said Baclit. The 21-year-old helps support her sister and her nieces and nephews in the Philippines. “They depend on us. What we send to them pays for their kids’ school tuitions and for household costs.”

About 38,000 San Franciscans will see their paychecks increase as a result of the passage of Proposition L, according to an analysis by the Center for Labor Research and Education at UC Berkeley. Another 17,700 people who live in the Bay Area and work in the city will also start earning more per hour in 2004 than they are today.

Proposition L supporters have claimed all along that the local economy would receive a boost from the extra wages, but the international implications could be even greater. In San Francisco, $1.75 goes only so far. That amount can be stretched a little further abroad.

“We’ll be sending more (money home),” said Llaga, who also helps support a sister. Llaga earns minimum wage, while Baclit received a bump to $7.50 last week after being promoted to supervisor. The couple are expecting their first child, a son, in January.

Few expect to start living in luxury, but the mandate to make employers pay more does feel a bit “like we won the lottery,” said Santiago Ruiz, executive director of the Mission Neighborhood Centers, a social services agency.

“I think it will improve people’s quality of life somewhat, but a lot of it will be more psychological, especially to those who send $40 to $50 a month back home to support a wife or children,” he said. “Most people I’ve been talking to today are in a state of euphoria. It’s given folks a nice sparkle.”

The vast majority of minimum wage earners in the Bay Area are African American, Asian, Latino and other immigrants who will now have between $1,700 and $2,400 more to spend each year on food, clothing and medicine, according to the UC Berkeley analysis.

“People of color are disproportionately represented in low-wage jobs in the city, so any increase in the minium or living wage would probably benefit by definition low-income residents, and therefore impact neighborhoods of greater poverty and low-wage income the most,” said Brian Murphy, director of the Urban Institute at San Francisco State University.

Female workers, who tend to comprise the largest number of housecleaners, child-care providers and in-home health-care workers, also stand to reap tremendous benefit from the increase in wages, said Renee Saucedo of La Raza Centro Legal in San Francisco, and a member of the Proposition L steering committee.

“Domestic workers in particular tend to be very isolated, they work in people’s homes on their own, and many employers pay domestic workers and caregivers on a weekly or monthly basis. When compared to the number of hours worked, sometimes it works out to as little as $2 an hour.”

In Chinatown, Su Li provides home care to senior citizens for $10.10 an hour. She is hoping the minimum wage increase will mean a pay bump up for her as well.

Su emigrated from China nine years ago and still sends money to her 78- year-old father. “It is our responsibility as children to help,” she said through an interpreter.

“Many of us help support family members. Even if it is difficult here, we send money home, especially on special occasions or holidays like New Year’s.”

Su, who shares a single-occupancy room with her husband, says the wage increase will help, but many will continue to struggle.

“It’s expensive to live here,” she said. “Prices keep going up. The minimum wage hike will just help us catch up with price increases.”

Juanita Gongora, who earns minimum wage at a Mission District restaurant and $7.50 an hour at a deli, is also unsure of the impact. Gongora sends $300 a month to family members in Mexico.

“They can raise the minimum wage,” Gongora said through an interpreter, “but they raise everything else, too.”

Gordon Mar, however, says the increase will make a difference. The director of the Chinese Progressive Association does not believe the wage increase will lead to layoffs, a concern for many. Instead, he thinks it will only stimulate Chinatown’s economy.

On Sunday, the association will mark the passage of Proposition L with a victory celebration in Chinatown.

“When we went door-to-door talking to people about the campaign, the overwhelming majority of people made comments to us, that, well, it’s about time,” Saucedo said. “It is also a sign that working-class communities are strong enough and united enough not only to pass something like Prop. L, but also to combat other anti-poor initiatives.”

Proposition L is an ordinance that will require most employers to pay a minimum wage of $8.50 per hour for work performed within San Francisco after Jan. 1, 2004 (minimum wage is $6.75 statewide).

Each year, the city will adjust the amount of the minimum wage based on increases in the regional consumer price index. The minimum wage requirement applies to employees who work two or more hours per week.

Link: Minimum wage jump welcomed / Increase can mean a lot to those earning a little