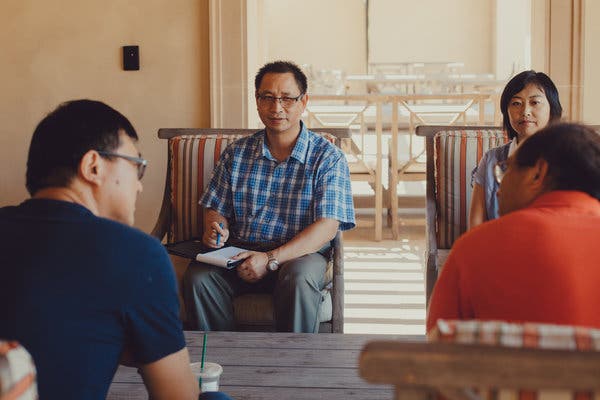 George Li, second from left, leads a Chinese-American political action committee, The Orange Club. “We just realized if we’re not involved in this process, the political process in America, we would be forgotten,” Mr. Li said. Credit Rozette Rago for The New York Times

IRVINE, Calif. — George Li grew up in a Chinese society that he felt did not offer a fair shake. The government of Mao Zedong deemed his family capitalists and imprisoned his father.

So when Mr. Li moved to California in 1999, he felt he had found his American dream. He worked hard and earned his rewards: a master’s degree, then a job that allowed him to live comfortably with his wife and two children.

But four years ago, he became alarmed when a co-worker told him about a state measure that would allow California’s public universities to use affirmative action in their admissions. Fearing that this would hurt his children’s educational chances, Mr. Li for the first time in his life became politically active.

He signed a petition and donated money to a campaign to stop the affirmative action measure. He sped up his timeline to become a citizen so that he could vote. He campaigned for Republican candidates for the State Legislature. More recently, he took the lead of a local Chinese-American political action committee, called The Orange Club, which is now focused on supporting California Republican candidates in the midterms.

“We just realized if we’re not involved in this process, the political process in America, we would be forgotten,” Mr. Li said.

Mr. Li, 49, is among an increasingly vocal group of Chinese-Americans who were once politically dormant but have been galvanized by the fight over race-based school admissions.

From Irvine to Houston to the Washington suburbs, Chinese activist groups like The Orange Club are beginning to capture the attention of lawmakers and influence policy debates. Much of their political activity can be found on the Chinese social media network WeChat, where the activists share articles and spread their message. And they have a clear litmus test for any politician seeking their support: opposition to affirmative action.

Their numbers are small compared with the overall population of China-born immigrants, which has exploded over recent decades, from about 472,000 in 1980 to more than 2.8 million in 2016, according to Andrew Beveridge, a professor at Queens College, based on census data.

But a number of recent fights over education have highlighted their growing political clout. Dozens of Chinese-American groups helped draft a complaint filed with the Justice Department in 2015 that accuses Harvard of discriminating against Asian-Americans in admissions. They were on the front lines of protests several weeks ago when Mayor Bill de Blasio of New York proposed changing the admissions criteria for his city’s specialized high schools, where Asian-Americans account for more than half the population.

The activists have yielded victories. In California, they helped defeat the affirmative action measure, known as S.C.A. 5. And in New York, the Brooklyn borough president, Eric Adams, initially supported Mr. de Blasio’s plan, only to backtrack after the uproar led by Chinese-Americans.

The debate over race in education centers on how much schools should try to control their racial makeup. At many elite universities and specialized high schools, black and Hispanic students are underrepresented, while Asian and white students are overrepresented relative to their overall population.

Activists like Mr. Li worry that if schools calibrate their student ratios around race, Asian students are most likely to lose out.

The Orange Club grew out of a group of mostly Chinese-American mothers in Orange County who helped new immigrants navigate the school system and the community. When the affirmative action measure emerged in 2014, several parents in the group began asking what they could do to stop it, said Sarah Yang, who was among those who then founded The Orange Club.

Ms. Yang has a 19-year-old son who will be a sophomore at the University of Chicago, and a 16-year-old daughter who is entering 11th grade in high school.

While the University of Chicago was one of her son’s top choices, Ms. Yang said that there were other elite schools he did not get into.

“Nobody knows for sure what played a role in the decision making,” she said. “But I think in general, race is a part of the equation. How significant, we don’t know. We all understand for Asian kids you must do better in every way in order to get into college compared to other races.”

Ms. Yang said her daughter is mindful of the high standards she faces as an Asian-American to get into elite colleges, and she places extra pressure on herself.

“That’s something that I feel that’s not fair in a way,” Ms. Yang said. “They have to work extremely hard in order to get into their dream school.

Ms. Yang said she was familiar with racial struggle. She had to overcome a lot of challenges to become the vice president of engineering at a technology company dominated by white men. Schools, she said, should be the great equalizer, a place where your race or gender should not give you an advantage.

But affirmative action turned that notion on its head, Ms. Yang said. Of S.C.A. 5, she said, “I didn’t think that the U.S. could have such an unfair bill.” 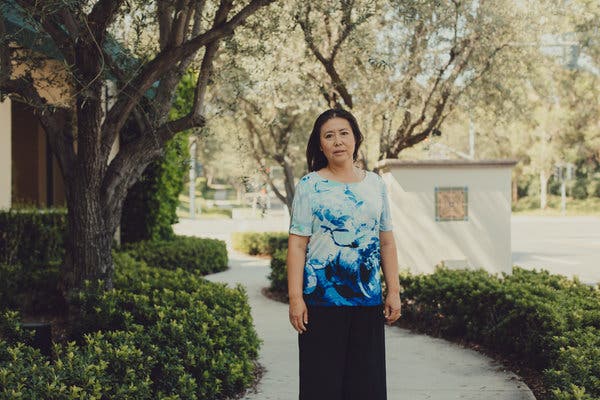 Sarah Yang, a founding member of The Orange Club. “We all understand for Asian kids you must do better in every way in order to get into college compared to other races,” she said. CreditRozette Rago for The New York Times

During the fight over the measure, Ms. Yang and other Chinese-Americans in Orange County held meetings, handed out fliers and signed online petitions. They protested in front of the office of Assemblyman Ed Chau, who eventually broke with his fellow Democrats and came out against the bill.

In late 2014, the group interviewed and endorsed four Republican candidates for the State Legislature who opposed affirmative action. It enlisted dozens of volunteers to campaign for them. All four candidates, none of them incumbents, won.

“They were a constant presence in my campaign office,” said Young Kim, a Republican who unseated an incumbent Democratic assemblywoman and is now running for Congress. “This was the first time that I knew that there were very active Chinese-American parents that were organizing this movement, specifically to fight against S.C.A. 5.”

Even after winning the fight in California, Mr. Li and other activists remain wary. Mr. Li said it was important to prevent Democrats in the California Legislature from gaining a supermajority that could allow them to pass a bill reinstating affirmative action. He said he was still worried about what the future held for his 13-year-old son, despite his strong academic performance.

“I think for him it’s going to be really, really tough if nothing is changed in current college admissions system policies and practice,” he said. “As an Asian male, it’s going to be very tough for him to get admitted to a top, elite school.”

His daughter is entering her senior year pursuing environmental studies at the University of California, Berkeley — a college Mr. Li said he did not think she would have gotten into if affirmative action had returned to California.

For many Chinese families, a focus on education is deeply rooted in the tradition they came from.

The civil service exam was a staple of Chinese governance for more than 1,000 years, leading to the rise of a gentry class of bureaucrats who supplanted aristocrats with inherited privileges. The test was a powerful engine of social mobility. The exam was abandoned in 1911, when the Qing imperial dynasty was overthrown.

Later, under Mao and during the massive upheaval of the Cultural Revolution, most schools were closed. When they reopened after the movement ended in 1976, it was clear just how much the country yearned for education. More than 11 million students flocked to take the college entrance exams over the next two years.

Chinese-Americans, most of whom voted for Hillary Clinton in 2016, are split on whether to support affirmative action. Their support for it has fallen in recent years, from 78 percent in 2012 to 41 percent in 2016, according to the National Asian-American Survey. Among other Asian-Americans over that time, backing for affirmative action has remained consistent, at nearly three in four.

Alex T. Tom, the executive director of the Chinese Progressive Association in San Francisco, said that he supports affirmative action because he believes that Asian-Americans, like others, benefit from learning in diverse environments.

“There are benefits of living in a pluralistic society,” he said. “And there’s benefits that I gained from being able to have a suite mate who was black, and also someone who was Latino and white.”

And he said that while some Chinese immigrants may feel that they can overcome potential discrimination by having degrees from elite institutions, they would still face racism.

“You’re still, no matter what, seen as kind of like an other in this country,” he said.

One argument for affirmative action is that it would help correct for the harm done to generations of African-Americans who have faced systemic racism.

But a number of other Chinese-American activists said they believed that race-based admissions were one of the few things in the United States that represented true discrimination. Tony Xu, a member of the Silicon Valley Chinese Association, said he was not so sure about other allegations of racism.

“Inside people’s minds, maybe there’s something still there,” he said. “Systematically there’s no discrimination. I don’t believe that; I don’t feel that.”

Instead, activists said the slights they experience — whether it’s someone mocking their accent or the shape of their eyes — are limited to personal interactions.

For some of the activists, their political work has led them to take up other issues. In Maryland, a sanctuary city measure proposed in 2017 failed after a Chinese activist group protested it. The law would have barred the use of state and local funds to aid federal immigration enforcement. The Chinese-Americans in opposition said that since they had followed this country’s immigration law and waited patiently for citizenship, others should, too.

The Orange Club is now focused on helping Republicans win in midterm races this fall. Orange County is host to a number of competitive House races, and the group is also supporting John Cox, the Republican candidate for governor of California.

In June, a post on an Orange Club page sought to rally volunteers to help in the final days of the congressional primary campaign of Bob Huff, a Republican and former state senator. The article asked followers to add their names to the post if they could help. Twenty-eight people signed up for what was ultimately an unsuccessful campaign.

“Let’s not forget that Bob Huff was alone fighting against S.C.A. 5 in the California Senate in 2014,” the post read, adding that it was time “to pay him back with tangible action. God helps those who help themselves. Helping Bob Huff is helping the Chinese people ourselves.”