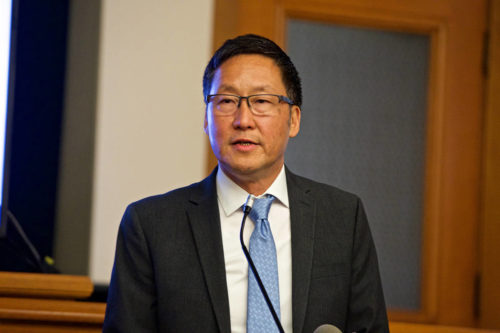 Supervisor Gordon Mar introduced legislation giving some workers the right to get their jobs back if they were laid off due to coronavirus. (Kevin N. Hume/S.F. Examiner)

Workers laid off from large employers in San Francisco were granted the right Tuesday to return to their old jobs.

The Board of Supervisors voted 10-to-1 to approve Supervisor Gordon Mar’s “right to reemployment” legislation that requires large employers to first offer laid-off workers their old jobs back before offering employment to new applicants.

“It is an urgent need to ensure that as we reopen our economy there is a fair process to bring back workers,” Mar said, adding that it “will help tens of thousands of these unemployed workers.”

Supporters have argued the requirement is necessary to ensure employers don’t use the crisis as a chance to hire new employees who are younger and will cost them less than their laid-off staff.

As unemployment has soared to more than 12 percent, the effort is also seen as an effective measure to “provide economic relief directly to the affected employees and their families, giving them the opportunity to start working again as soon as practicable,” the legislation says.

The approval comes after Mar made a series of amendments to the proposal last week to address the sharp criticism it initially received from the business community, along with a threat to sue to block it.

One of the biggest changes was to apply the law to employers with 100 or more employees. Initially the proposal applied to businesses with 10 or more employees, which drew the ire of the Small Business Commission.

While the change dampened the opposition to the proposal from the business community, it also caused some of its early backers to withdraw their support.

Young Workers United and the Chinese Progressive Association said in a letter last week that exempting businesses with fewer than 10 employees was the “appropriate threshold for exemption, and raising that threshold higher will defeat the purpose of the ordinance in protecting workers who most need it.”

“Job losses were highest in low paying industries” they wrote in the letter. “Workers who had the least cushion to begin with are most likely to have been laid off. For undocumented workers in particular, who are unable to access unemployment insurance or the federal stimulus package, this is a disastrous economic blow.”

“We do not support Mar’s rehire [legislation] with amendment that only applies to employers with 100 or more workers,” Lucia Lin, co-director of Young Workers United, said in an email to the San Francisco Examiner Tuesday.

Mar said some of the changes “were very difficult, necessary decisions” as he strove to strike a “careful balance between protecting vulnerable workers and supporting businesses in reopening.”

Heading into the board’s vote Tuesday, the San Francisco Chamber Commerce took “no position on the overall legislation.”

“We’re supportive of the amendments Supervisor Mar has introduced, and thank him for collaborating with the business community on the legislation,” chamber spokesperson Jay Cheng said.

Supervisor Catherine Stefani was the lone vote in opposition. She argued the legislation would hinder the reopening of some businesses.

“The pandemic and recession are hard enough to overcome without The City adding more red tape and the cost associated with complying with this legislation,” Stefani said. “[Businesses] need more support and more flexibility.”

The requirement applies to those large businesses that laid off 10 more employees due to COVID-19 impacts within any 30-day period since Feb. 25, when San Francisco first declared a local emergency over the global pandemic.

Since the local emergency was declared, 352 WARN notices have been filed with The City announcing the layoffs or furloughs of 38,994 employees, according to data from the Office of Economic and Workforce Development. Worker Adjustment and Retraining Notifications, or WARN notices, are filed by businesses with at least 75 employees.

The rehire requirement remains in effect for 60 days unless re-enacted by the board.